Barnes ready for All Black challenge

Australia dynamo Berrick Barnes fully expects Saturday's Bledisloe Cup and Tri Nations re-match against the All Blacks to be the toughest challenge of his fledgling Test career. [more] 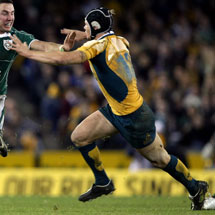 Australia dynamo Berrick Barnes fully expects Saturday’s Bledisloe Cup and Tri Nations re-match against the All Blacks to be the toughest challenge of his fledgling Test career.

The diminutive inside-centre once again stood tall under heavy fire in Sydney claiming man-of-the-match honours in his side’s stirring victory over the Kiwis.

And the laid back 22-year-old insists he has plenty more to give as the Wallabies look to extend their winning run to six matches since the appointment of coach Robbie Deans last month.

"I’m good, I’m excited, one more week and then I’ve got a break," Barnes beamed when asked how his battered body was holding up.

"I know this is probably going to be the toughest match physically I’ve ever encountered and we know they’re going to come at us, especially with (returning skipper) Richie McCaw leading them as well.

"It’s a big challenge for us and one we’re looking forward to."

Having slumped to rare consecutive defeats at the hands of the Springboks and Wallabies, Graham Henry’s All Blacks will be desperate to restore order at their traditional stronghold of Eden Park.

Indeed, the Wallabies last beat the All Blacks at the famous venue in 1986 – the same year Barnes was born.

But the no-nonsense Queenslander insists the side is completely unfazed by the Wallabies’ poor history in Auckland and vowed to employ the same carefree approach that paid heavy dividends five days ago.

"This is all mental this game, 90% of it this weekend is going to be (how well you) get up mentally for it," he said.

"I’ve never encountered Eden Park in a Test match situation so I suppose we go in there with no baggage once again and just try and let it rip."

Asked if the All Blacks would have the edge should the heavens open closer to game-time, Barnes reaffirmed his side’s new-found resolve insisting: "We’ll be up for an arm wrestle if it comes to that.”

He added: "We’re excited about this. Like I said we’re all going over there with no baggage.

"We’ve got nothing to lose we’ll just get into it."

And the usually understated former Brisbane Bronco, who will again be required to do a mountain of work in defence this weekend, conceded a victory at Eden Park would hold extra significance for Australian rugby.

"It would be massive for the game of rugby in Australia, we obviously saw last week with the TV coverage and things like that, the fans are loving it and people are talking about it on the street again," he said.

"It’s just exciting to be a part of that as a player and the good thing about it is we’re actually on the field and we get to do something about it."