MacDonald ruled out of Auckland clash 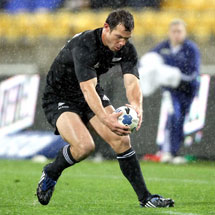 With question marks already over who will play at scrum-half because of injuries to Andy Ellis (ribs) and Jimmy Cowan (broken nose and knee strain) and hookers Andrew Hore and Keven Mealamu bracketed after Hore bruised a hip, MacDonald was forced to withdraw from Saturday’s game at Eden Park because of ongoing concussion symptoms.

The full-back suffered a bang to the head during the 30-28 loss to South Africa in Dunedin on July 12 and was continuing to show signs of fatigue at team meetings and light-headedness during training, team doctor Deb Robinson said.

MacDonald was not named in the team for last weekend’s 34-19 loss to Australia in Sydney as he was also recovering from knee, elbow and groin problems.

"But clearly he has got a history and for that reason we have decided to not risk him."

A replacement for MacDonald is likely to be announced on Thursday but the 30-year-old’s withdrawal could see Mils Muliaina, who was named on the wing for Saturday’s game, return to full-back with Anthony Tuitavake or Rudi Wulf coming in out wide.

A decision is also expected on Thursday on who will start at scrum-half and hooker.

Dr Robinson said Hore was making good progress, while Cowan was confident he would be fit enough by Saturday to play.

If he comes through a fitness test he is likely to start with Piri Weepu, who was called in as cover on Monday, on the bench.

There was however, some positive news for the All Blacks coaches with captain Richie McCaw declaring himself ready to take on the Wallabies.