History will be revisited in more ways than one when South African Rugby celebrates Nelson Mandela's 90th birthday with a World Cup re-match at Coca-Cola Park (formerly Ellis Park) a week on Saturday. [more] 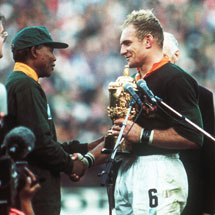 History will be revisited in more ways than one when South African Rugby celebrates Nelson Mandela’s 90th birthday with a World Cup re-match at Coca-Cola Park (formerly Ellis Park) a week on Saturday.

The Springboks and Argentina renew their Rugby World Cup rivalry when as many as 23 of the players who went head-to-head in last year’s semi-final in Paris are likely to take the field in Johannesburg.

But there will also be echoes of the Springboks’ first World Cup triumph in 1995 as the elements of Mr Mandela, the Springboks, and Francois Pienaar are reunited on the field where Madiba presented the trophy to the South African captain in what became one of the most iconic moments of the 20th century.

South African Rugby has dedicated the match to Mr. Mandela and will make a special presentation before kickoff to his 46664 Foundation.

The Nelson Mandela Foundation welcomed SA Rugby’s decision to honour Mr. Mandela in his 90th year with an international event involving some of the world’s top rugby players.

“Mr Mandela is widely associated with South Africa’s triumph in world rugby and its power of the sport to unite people,” said Achmat Dangor, Chief Executive Officer of the Nelson Mandela Foundation.

“It is significant that this event is taking place on Women’s Day as women are disproportionately affected by the pandemic and are therefore most vulnerable”.

The day of celebrations will also feature a rugby match between the Springbok Women’s team and an International Nomads team, featuring the cream of international women players from the world over.

“This is an incredibly auspicious occasion for South African rugby,” said the president of the South African Rugby Union, Oregan Hoskins.

“It is rugby’s chance to say ‘thank you Mr Mandela’ on the occasion of his 90th birthday. Our game has had a hard road to follow in recent years but Mr Mandela has offered support and encouragement at vital times.

“One of the enduring images of his legacy will be the day that he handed the Rugby World Cup to Francois Pienaar – that he did it wearing a Springbok jersey was an astonishing gesture of reconciliation.

“We are honoured that he has given his blessing to the match between the Springboks and Pumas to allow us to show our appreciation.”