New London Wasps captain Raphael Ibanez has explained that the looming presence the 2009 Lions tour will make the new season even more special for the club's international players. [more] 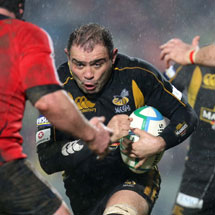 New London Wasps captain Raphael Ibanez has explained that the looming presence the 2009 Lions tour will make the new season even more special for the club’s international players.

Ibanez, who was appointed skipper of the current Guinness Premiership champions by Wasps and Lions head coach Ian McGeechan on Monday afternoon, believes that a large number of his squad have the potential to be on the plane to South Africa in just under 10 months’ time.

"2008/09 will be a very special year for our international players, competing for places for the Lions tour, which is a goal many of my teammates can reach,” said Ibanez.

“My priority will be to make sure everyone delivers for the club first. I want us to keep winning and as the captain it is my job to ensure we stay focused.”

Ibanez intends to give all his British and Irish team-mates the best possible chance of earning Lions selection by leading the Adams Park outfit to another trophy-winning season.

"I am very proud to be a Wasp and I am looking forward to the challenge of next season. This year coming is pretty special for Wasps. As the Guinness Premiership champions we will want to keep hold of our silverware and pick up even more honours. We have a fantastic squad filled with lots of young and exciting talent and I am very proud to lead this group of players.

"When our coaching staff announced they had made their decision in naming me as Wasps captain, I felt really honoured. Working with Ian McGeechan and Shaun Edwards and all of the coaching staff at Wasps has been a fantastic experience for me. This club is much more than just rugby, it is family, and I am delighted and very privileged to take the role of club captain.”

Ibanez will make his non-competitive debut as club captain when the squad travel to Dax, his home town and the first side he played rugby with, on August 14 for Wasps’ first pre-season fixture. Wasps then prepare for the Middlesex Sevens on August 16 before their remaining pre-season matches against Edinburgh at Murrayfield on August 23 and Llanelli Scarlets at Adams Park on August 29.