Monty the cover for No10

Percy Montgomery will provide the cover for the fly-half position should current incumbent Butch James get injured during South Africa's clash with Argentina on Saturday. [more] 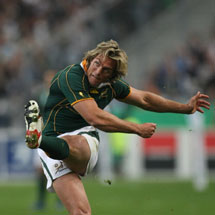 Percy Montgomery will provide the cover for the fly-half position should current incumbent Butch James get injured during South Africa’s clash with Argentina on Saturday.

Having this week released Ruan Pienaar and Francois Steyn, Springbok head coach Peter de Villiers confirmed that the former Newport full back would step into the stand-off position if James was forced to leave the field in Johannesburg.

"Percy will never start at flyhalf while I coach, but if we need to (use him) he will be there," de Villiers explained.

De Villiers also suggested that Pienaar and Steyn’s relative lack of experience in the No10 shirt counted against them when the squad was cut to just 24 players earlier this week.

Although he stated that he was keen to keep both Pienaar and Steyn involved, de Villiers believes a new mutual relationship with the South African Unions that promotes the release of players for Currie Cup duty will prove beneficial for all parties.

"It is the most difficult thing for a coach to tell players they haven’t been selected, especially in this case where no player has not been up to standard. If I had the choice I wouldn’t have let them go.

"With this more open relationship with the unions, we and the players will benefit. It was in the interest of the players themselves that we decided to release them to their unions so that they can get game time. Surely that is better than just holding tackle bags all week.”

A further two players will join Pienaar, Steyn, Gurthro Steenkamp and Odwa Ndungane in being released from the squad when the matchday 22 and starting XV are named tomorrow.

Although the Bok squad has already been cut to 24 players for Saturday’s match against the World Cup semi-finalists, de Villiers will be able to pick any of the 30 players named in his original squad for the remainder of the Tri Nations, which restarts with the game against New Zealand on August 16.