Lamont back on Lions trail

Scotland international Rory Lamont begins his quest for a place on next year's Lions tour when he returns from injury in Sale Sharks' clash with Perpignan this evening. [more] 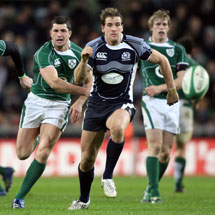 Scotland international Rory Lamont begins his quest for a place on next year’s Lions tour when he returns from injury in Sale Sharks’ clash with Perpignan this evening.

The 25-year-old was arguably Scotland’s finest back at the 2007 World Cup in France but has spent the past six months on the sidelines following a collision with England’s Iain Balshaw during this year’s Six Nations.

"Rory has worked with Steve Walsh and the conditioning team on his rehab,” said Sale’s director of rugby Philippe Saint Andre.

“He also had a minor knee operation to clean up the joint and he is really looking forward to the new season.

"I have only selected from those players who have done the full close season preparation with us and it’s a great opportunity for them to impress and stake a claim for a place in the team."

Lamont, who is equally comfortable at full back or on the wing, currently has 14 Scotland caps and five international tries to his name.