Declan Kidney has suggested that 2005 Lions captain Brian O'Driscoll may not be the man to skipper his new-look Ireland side. [more] 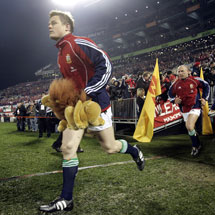 Declan Kidney has suggested that 2005 Lions captain Brian O’Driscoll may not be the man to skipper his new-look Ireland side.

O’Driscoll has led Ireland for five years following the retirement of Keith Wood but Kidney has hinted that he may give the talismanic centre more opportunity to focus on his individual contribution rather than the performance of the team.

“I think it’s important he gets a chance to concentrate on his own game,” said Kidney.

Former Munster coach Kidney, who is currently overseeing his first week’s training in Cork, has made it clear that any decision over the captaincy will not be finalised until November’s autumn internationals.

“Brian and myself have been talking and taking a look at things. Come November we’ll take a good look at it and see how things are.

"You don’t win three Triple Crowns and throw that away too easily. At the same time you want to give him a small bit of space.

“It wouldn’t be usual to name a captain at the start of a set-up."

O’Drsicoll scored a stunning solo try in his Lions Test debut against Australia in 2001 before being named as tour captain for the 2005 series against the All Blacks. That tour finished in disappointing fashion, however, as a shoulder injury ensured O’Driscoll’s tour came to an abrupt end just minutes into the first Test defeat in Christchurch.

If O’Driscoll is selected to lead the Lions in South Africa in May and June of next year, he would become only the second man, after Martin Johnson, to skipper the Lions on two occasions.