Boks bounce back to pulverise Pumas

The Spingboks hammered out a warning to Ian McGeechan's Lions that they will be no easy touch on home soil next year. [more] 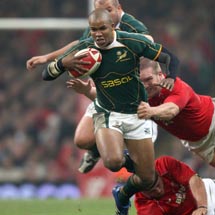 The Spingboks hammered out a warning to Ian McGeechan’s Lions that they will be no easy touch on home soil next year.

The Spingboks hammered out a warning to Ian McGeechan’s Lions that will be no easy touch on home soil next year.

The world champions fought back from a sluggish start to hammer Argentina 63-9 in the Nelson Mandela Tribute Test match.

Two tries apiece from JP Pietersen and Joe van Niekerk clinched a resounding nine-try win in Johannesburg and hand them a massive boost ahead of their Tri Nations match with New Zealand next Saturday.

The Springboks had fallen 9-0 behind in the opening 25 minutes but rallied in style to steamroller the South Americans.

The Pumas took a deserved lead on four minutes after wing Pietersen was caught in possession and fly-half Felipe Contepomi slotted home the penalty.

Leinster’s cool outside half extended the advantage five minutes later with his second successful kick to fire Argentina into a 6-0 lead.

The hosts struggled to gain a foothold in the match and after Contepomi missed a third penalty, he made no mistake with another opportunity in the 25th minute after South African full-back Conrad Jantjes played the ball on the ground.

But the Springboks hit back and crossed for the first time when centre Jean de Villiers broke three tackles before feeding Jacobs on the outside.

Then Nokwe, making his debut for the injured Bryan Habana, scored his first international try five minutes before the break with a superb solo run to give South Africa a 14-9 advantage.

Peter de Villiers’ men kept up the pressure in the second half and after Spies added the third try on 43 minutes the floodgates opened.

Pietersen touched down for the first of his double on 49 minutes before du Preez, a quick-fire brace from van Niekerk and du Plesis all scored before the wing wizard rounded off the scoring in this crushing win with four minutes left to give them a boost ahead of their final three home Tri-Nations clashes.