The Lions will be facing the 'best team in the world' when they travel to South Africa next summer, according to Argentinean captain Felipe Contepomi. [more] 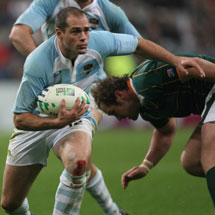 The Lions will be facing the ‘best team in the world’ when they travel to South Africa next summer, according to Argentinean captain Felipe Contepomi.

Contepomi skippered the Pumas in last Saturday’s rematch of the World Cup semi-final, with the Springboks producing a stunning display to run out 63-9 winners at Johannesburg’s Coca Cola Park.

“It’s always difficult to play your first game of the season, and imagine if you play against the best team in the world,” said Contepomi, who has picked up plenty of experience playing with and against the top players in Britain and Ireland during his time with Magners League champions Leinster.

“It was really tough, but we tried our best and I hope South Africa now goes all the way for the Tri-Nations.”

Having led 9-0 with more than half-an hour played, Contepomi’s side then shipped nine unanswered tries as the Boks showed the Lions exactly what they will be up against in less than 10 months’ time.

“We have always been inspired by South African rugby,” added Contepomi, “and I think we played very similar to what they tried to do.

“I think if they are the best team in the world it is good to copy them, but we lasted only 30 minutes.”

“They are all tough things, the time of the year, the altitude, but the main thing is that we had an opportunity to play against the best team in the world.