Bath's Australian playmaker Shaun Berne views the injury that prevented him from facing the Lions in 2001 as arguably the most disappointing moment of his career. [more] 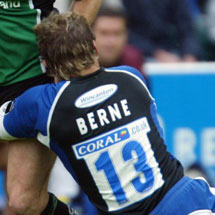 Bath’s Australian playmaker Shaun Berne views the injury that prevented him from facing the Lions in 2001 as arguably the most disappointing moment of his career.

The then 22-year-old was all set to appear for the New South Wales Waratahs against Graham Henry’s tourists on June 23 but a broken ankle in his last game of the season with Bath ensured the opportunity would be taken away from him.

"It’s definitely something I would like to have been involved in," says Berne, who is now two years into his second spell in the English Premiership following five seasons back in Sydney.

"A British person’s dream is to play for the Lions, whereas for a person from the southern hemisphere who’s involved in rugby and understands the game and how it works, it was a chance for me to play against the best players Britain and Ireland has to offer.

"Although I get to play against a lot of these guys in the Guinness Premiership, it was still a chance that I would like to have had."

Berne originally arrived in the West Country from Australian club side Randwick in 2000, with the 2001 Premiership Final clash with Wasps his last game in a Bath shirt ahead of a move to then Super 12 rugby with the Waratahs.

"It was an unfortunate accident in that I broke my ankle playing in my last game for Bath at Twickenham.

"I’d already signed a contract with the Waratahs and, if I hadn’t broken my ankle, I was told I would have been involved with the Waratahs game against the Lions, which was infamous for the Duncan McRae and Ronan O’Gara incident

"I don’t know if I would have started, but it would have been pretty special in front of my home crowd in Sydney."

In what turned out to be a ferocious, action-packed battle at the Sydney Football Stadium, the Lions ran out 41-24 winners against the Waratahs but eventually lost the all-important Test series 2-1 to the Wallabies.

The match against the Waratahs saw some ugly scenes in Sydney

Although he was forced to watch from the sidelines rather than being a part of the action itself, Berne insists that it was simply impossible for Australians to ignore the impact that the 2001 tour had on their country.

"It does have a positive effect, especially in terms of rugby. In Australia, you have a number of sports that rugby has to compete against.

"It brings a lot of tourists – lots of people from Britain and Ireland support the Lions and follow them around the country – and it helps Australian rugby massively.

"I think it really hit home back in 2001, especially after that first Test. A lot of Australians were shocked to see the game on TV and see the Australian crowd covered in red.

"To see that red in that stadium shocked a lot of Australians and there was a big push for that second game in 2001 to get the crowd in gold. There was a massive awareness after that first Test, and the results showed."

Berne may not have had the honour of playing against the Lions but his knowledge of the British and Irish game and the relationships he has built with those who have worn the famous red shirt will ensure he will be watching with interest when the Lions travel to South Africa next summer.

"I wasn’t completely aware of the Lions until I got a bit older and really got serious about my rugby. I then became aware of how special it is for the British people, especially playing with some of the guys who’ve represented them at that level – it’s the highest point of a rugby career for a British person.

"It’s cricket and rugby in South Africa and they’re played at different times of the year so they don’t really clash. Rugby’s the main sport there, unlike in Australia where we have rugby league and AFL. Rugby is a huge focus and I’m sure the Lions tour is going to be a huge event."