Hansen backs Boks to bounce back

South Africa will bounce back from their 19-0 defeat against New Zealand in Cape Town and defeat Australia next weekend, according to All Blacks forward coach Steve Hansen. [more] 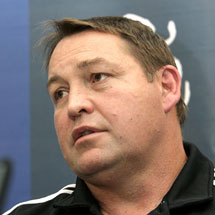 South Africa will bounce back from their 19-0 defeat against New Zealand in Cape Town and defeat Australia next weekend, according to All Blacks forward coach Steve Hansen.

South Africa will bounce back from their 19-0 defeat against New Zealand in Cape Town and defeat Australia next weekend, according to All Blacks forward coach Steve Hansen.

The world champions’ hopes of claiming this year’s Tri-Nations were cast into doubt as they drew a blank in their first home game of the tournament on Saturday.

South Africa have managed just one win from their opening four games – against the All Blacks in Dunedin last month – and now face two crucial encounters against the Wallabies in successive weeks.

The media spotlight on Peter de Villiers’ team ahead of next Saturday’s clash in Durban is expected to be intense but Hansen expects that will act as a spur for them to return to winning ways.

“There’s no doubt that the Springboks will very disappointed with themselves this (Sunday) morning," Hansen said.

"They will be reminded throughout this week about this defeat. Their critics will be onto them relentlessly.

"But I have no doubt they will be up for it next week in Durban. After Durban it will be Johannesburg and that’s been a happy hunting ground for them.”

Hansen also pointed to Australia’s poor record away from home in the Tri-Nations as room for optimism for the Springboks.

The Wallabies have not won away since 2001, the last time they won the Tri-Nations, while their drought in South Africa stretches back eight years when, coincidentally, they won in Durban.

“You must not forget that Australia also have great pressure of their own,” Hansen said.

“They have not won away from home for some time so they also want to get that monkey off their back.

“I have no doubt that the Boks will be up and ready next week when they come up against Australia.”

South Africa will reassemble in Durban on Monday and De Villiers has already indicated that there will be a lot of “soul-searching” to be done by his side.

"There’s a few things we need to work on, you always need to do some soul searching when you play like this," de Villiers said.

"Physically, and all our other attributes – we’re there. We just need to change our mindsets.

"We didn’t see any body language of superiority to show that we are a proud rugby nation. Perhaps that’s our biggest challenge at the moment.

“I think we were let down again by poor decisions. We didn’t take the chances that were given to us, right from the beginning. We took the wrong chances at the wrong times, but credit to the All Blacks who put us under tremendous pressure and forced us to take those kind of chances.”