Lions hopefuls with point to prove 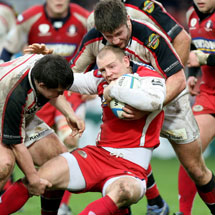 The England internationals will be looking for an impressive season in club colours as they aim to force their way into Martin Johnson’s reckoning having both missed out on a place the 32-man Elite Player Squad.

Injury prevented Tindall from touring with the Lions in 2005, while Vainikolo only converted to rugby union last season after previously playing rugby league for New Zealand. After scoring five tries on his competitive Gloucester debut, Vainikolo appeared for England in the Six Nations but has since been left out of both the senior and Saxons squad for the forthcoming season.

"This is another opportunity for us to progress our preparations against a very good French side and at the same time re-introduce some players to our squad," said Gloucester head coach Dean Ryan.

"We have competition for places across the squad and that intensity is going to be vital for us.

“After tomorrow’s game we only have one more opportunity in pre-season before the Guinness Premiership starts so it is very important we see a step-up in what we are trying to achieve.

"We appreciate tomorrow’s game will be another step up physically and that is a good thing. It is up to us to generate good habits now and build on them."

Gloucester have travelled with a 24-man squad for the pre-season clash with the French Top 14 side as they aim to bounce back from last season’s disappointing end to the Guinness Premiership season. Having again topped the Premiership standings at the end of the regular campaign, the Cherry and Whites slipped to a home defeat to Leicester Tigers at the semi-finals of the competition last May.

The squad that takes on Bayonne also includes former England No8 James Forrester, who returned to action after more than a year on the sidelines against Canada A 10-days ago.