Lions a highlight for Latham

As the Wallabies get ready to take on the Springboks in Durban this Saturday, we talk to one of the most influential players in Australia's recent history about one of their greatest-ever achievements. [more] 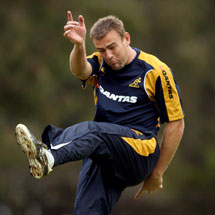 As the Wallabies get ready to take on the Springboks in Durban this Saturday, we talk to one of the most influential players in Australia’s recent history about one of their greatest-ever achievements.

The Lions travelled to Australia with high hopes in 2001 following a stunning series victory in South Africa four years earlier. However, despite a comprehensive first-Test triumph for Graham Henry’s tourists, it was the World Champions who would re-write the record books by becoming the first-ever Australian side to claim a series win against the Lions in more than 110 years of trying.

New Worcester Warriors full back Chris Latham was involved in both the first and second Tests during that series, starting the match in Brisbane and coming on as a replacement during the Wallabies’ crucial win in Melbourne.

Having been a part of the World Cup win in 1999, Latham has since reached a second World Cup Final, been the star performer in the Southern versus Northern Hemisphere charity match in 2005, been voted Australian Super 12 Player of the Year on three occasions, earned more than 100 provincial caps for Queensland and become the first back to win the John Eales Medal for the most impressive performer in a Wallaby season.

Despite such an extensive CV, the 32-year-old ranks the 2001 triumph against the Lions as one of the most memorable moments of his glittering career.

"When I was playing for the Reds, you never really look back and reminisce on the good times but, having left there, you certainly look back and think ‘that was a great and fantastic thing to be involved with’," says Latham.

"Being part of that squad and winning that series is a massive highlight within my career."

Chris Latham has had an astonishing career with Australia

Like so many other players and spectators around the world, Latham recognises the special place a Lions tour commands in the sporting calendar. He may have played, or be about to play, in some of the most exciting tournaments rugby has to offer, but Latham admits that a Test series involving the Lions is a truly unique experience.

"It’s one of those aspects of rugby that separates it from a lot of other sports.

"There’s a lot of fantastic traditions within rugby and one of those is being involved in playing against the Lions. Once I got involved in rugby and all of a sudden it was on the calendar, it was something I wanted to be a part of.

"I thoroughly enjoyed it, although it was brief but very exciting. It’s certainly one of those things that makes the brand of rugby more attractive.

"It’s one of those aspects of rugby that’s unique and I guess it’s pretty much like a World Cup. It’s one of those things that doesn’t come around all that often. You’re up against the best in that position and the quality of rugby is very high."

Latham is full of praise for those who follow the Lions

It’s not just the quality of rugby that Latham remembers from 2001, either. Equally impressive was the quality and magnitude of the support the Lions received Down Under.

Although he was playing against the Lions rather than for them, Latham cannot speak highly enough of the thousands of supporters who followed the tourists to the other side of the world. In his view, such enthusiastic and wholehearted support had, and continues to have, a massive impact on the way Australians follow the Wallabies.

"The supporters that support the Lions are phenomenal.

"I think it’s the pinnacle of the way rugby should be supported.

"To be honest, Australian rugby hadn’t been supported as well until the Lions toured. The first game we played in Brisbane, there were more red jerseys and Lions supporters than there were Aussie supporters.

"It changed not only the way the spectators reacted and supported but also the way the marketing and everything else went as well.

"I think, culturally, that gave Australia a boost and a shock to say ‘this is how we’re meant to support rugby’.

Interview
Previous story All Blacks release 12
Next story Caucau to become a Tiger?