New Leicester Tigers head coach Heyneke Meyer was impressed by the attitude shown by his players after their narrow defeat in his first game in charge last Friday. [more] 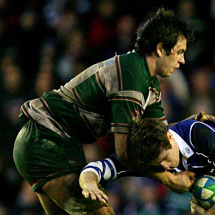 New Leicester Tigers head coach Heyneke Meyer was impressed by the attitude shown by his players after their narrow defeat in his first game in charge last Friday.

The former European champions lost 37-35 away to Biarritz after conceding a 78th-minute try but the South African was pleased that none of his squad looked for excuses or shirked responsibility.

“We set high standards and the players were disappointed in defeat,” said Meyer, who replaced Marcelo Loffreda at Welford Road earlier this summer.

“I like that. They could have looked for excuses, but I am happy that the guys were disappointed that we did not win.”

Meyer believes that his side could well have left for home with an impressive pre-season scalp but he has stressed that he is learning about his new squad all the time.

“I have a better understanding and better knowledge now of what the guys can do and where we want to go,” said the man who led the Blue Bulls to Super 14 glory in 2007.

“The game could have gone either way and we were disappointed by defeat. Even at the end I thought we could have kept the ball and another score would come.

“We created five tries, which is great to see, but there are lots of areas to improve on and we will be working hard to do that.
“The aim is always to win but also an aim here was to play our game and use the things we have been working on in training.”

Meyer, who gave game time to a number of academy and squad players in France, takes his side to Swansea to face the Ospreys this Saturday where he is expecting another meaningful encounter.

“We had a lot of 18 and 19-year-olds on the field at the end, and we had already taken off the captain and vice-captain to get game-time for as many of the squad as possible.

“I thought the youngsters put up their hands to play for Leicester in the future. All of those guys will learn from those situations.

“I prefer tough games away from home at this stage because you are under pressure and you want to see who can handle the pressure and who can’t.”

News
Previous story All Blacks release 12
Next story Caucau to become a Tiger?