Caucau to become a Tiger?

Fijian superstar Rupeni Caucaunibuca could be about to join Leicester Tigers. [more] 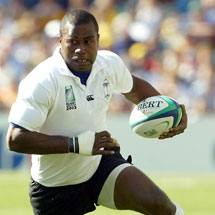 Fijian superstar Rupeni Caucaunibuca could be about to join Leicester Tigers.

The Guinness Premiership finalists have been looking to sign a specialist wing all summer and had been heavily linked with Leeds Carnegie’s Tom Biggs, but they now appear to have turned their attentions to one of the game’s most exciting players.

Caucaunibuca was released by French side Agen earlier this year after a series of disciplinary issues but the 28-year-old is currently back in Fiji playing club rugby with Tailevu.

"A lot of clubs are going after him now,” Tailevu coach Inoke Male told the The Fiji Times.

”It’s all because of the internet and websites that they came to know he was back playing rugby and getting into top form.

"He is going to Leicester for a week to check things out. It’s not yet finalised when he will be leaving but it could be by the end of this week."

If ‘Caucau’ does move to the Tigers, he will join up with international colleague Seru Rabeni, although Rabeni has himself had his disciplinary difficulties and is currently suspended after playing Sevens while serving a ban for making illegal contact with the eye of Saracens hooker Andy Kyriacu.