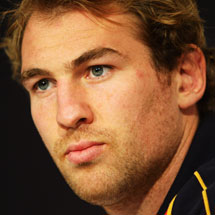 Australia hooker Stephen Moore has labelled the likely return of formidable duo Rocky Elsom and James Horwill for Saturday’s Tri Nations showdown with South Africa in Durban a major boost for the tourists.

The imposing pair spent the bulk of their time patrolling the sidelines at Wallabies training in recent days as they struggled to overcome foot injuries.

While Horwill, who suffered bone bruising against New Zealand in Auckland, was always considered a likely starter, Elsom’s appearance at Wednesday’s training session in Cape Town – his first on-field action since last month’s victory over the Kiwis in Sydney – was a welcome surprise.

"It’s a bit of a Lazarus effort from both of them really," Moore told Radio 2KY. "They sort of had (their protective boots) on until yesterday and then just walked straight out on one of the training paddocks.

"They both trained really well yesterday and look like they’ll be fit to play which is very good for us."

The Wallabies have not tasted victory on South African soil since their dramatic 19-18 win in Durban eight years ago – Stirling Mortlock kicked the winning goal from the sideline to steal the elusive victory while current assistant coach Jim Williams also featured in the match.

Asked if reversing their recent run of losses in the rugby-mad nation is a realistic goal, Moore said without hesitation: "I think it’s a great opportunity for us, you know every time you come over here, you obviously look to win the game … and that hasn’t happened for a while for us.

"But in saying that, the last time we did win was in Durban and I think the Wallabies have played pretty well there in the past so it’s a superb ground to play at and it’ll be a full house there (ABSA Stadium) and we’re really looking forward to it."

Moore added: “I think a lot of teams that come over here probably think it’s a lot harder than what it actually is.

“It’s still a game of rugby and we go out there 15 a side and it’s no different to playing at home and that’s the way we’ve got to approach it.”

Australia are well placed on nine points with three matches still to play in the Tri Nations tournament, trailing the All Blacks (14), who have one game remaining against the Wallabies in Brisbane, while the Springboks sit stranded on five points needing two bonus-point victories over Robbie Deans’ men to salvage their campaign.

The Wallabies are expected to name their squad for the pivotal clash on Thursday night.