Flanker Rocky Elsom has been included in Australia's squad for Saturday's Tri-Nations clash with South Africa in Durban after recovering from a foot injury. [more] 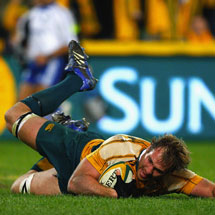 Flanker Rocky Elsom has been included in Australia’s squad for Saturday’s Tri-Nations clash with South Africa in Durban after recovering from a foot injury.

Elsom strained foot ligaments in Australia’s record victory over New Zealand in Sydney last month and has been forced to wear protective footwear since.

Coach Robbie Deans had been doubtful the 25-year-old would recover in time to play the Springboks, but in what team-mate Stephen Moore has described as a “Lazarus-like” effort, Elsom has been selected at number six.

Elsom’s return from injury has coincided with James Horvill maintaining his place in the squad at lock despite also struggling with a similar foot complaint following the Wallabies’ loss to the All Blacks in Auckland.

Along with Elsom’s inclusion, Drew Mitchell has been selected at full-back while Sam Cordingley will line up at half-back in three of five personnel changes to the Australian combination.

Mitchell and Cordingley take the places of the injured Adam Ashley-Cooper and Luke Burgess respectively.

The other changes to the Australian starting XV from the last game of the series sees Daniel Vickerman resume his starting position in the second-row, having come from the bench in his two Test outings of the season to date.

Tighthead prop Matt Dunning is also restored to the starting XV for the first time since the opening international of the year against Ireland. He swaps places with Al Baxter, who drops to a place among the reserves.

The starting side features four changes from the combination which eclipsed South Africa 16-9 in the Wallabies’ opening match of the 2008 Tri-Nations series in Perth.

Brett Sheehan is promoted to the match-day squad for the first time this year following Cordingley’s elevation into the starting line-up, being joined by Timana Tahu and Ryan Cross among the back replacements.