South Africa centre Jean de Villiers has called on his team-mates to "stand and deliver" against Australia in Saturday's Tri-Nations clash in Durban. [more] 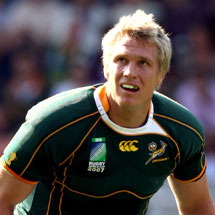 South Africa centre Jean de Villiers has called on his team-mates to "stand and deliver" against Australia in Saturday’s Tri-Nations clash in Durban.

After losing three of their four matches in the tournament thus far, there is growing disenchantment among the South African public regarding the way the world champions are playing and the poor results.

While they have been playing a more expansive game than the conservative approach normally seen from the Boks, they have only scored three tries under the new game plan and became the first Springbok Test side in 97 years to be held scoreless at home last weekend when they went down 19-0 to New Zealand.

Coach Peter de Villiers hinted to a Cape Town radio station that senior players may be replaced if the current trend continues, leading Jean de Villiers to urge his colleagues to come up with the goods this weekend.

"We need to stand and deliver," said the 27-year-old. "If we don’t deliver, then some guys, including myself, should be replaced.

"It is about performing in pressure situations and that is what we have to do. It is as simple as that."

De Villiers believes the Boks need to adopt a balanced game plan in order to achieve their goals.

"Maybe you need a 50-50 split between the styles, but at the end of day we want to win. In the Tri-Nations we have seen that the teams that kick best on the day win the games, so tactically we have to be very good tomorrow.

"You need to keep structure for most of the game, at least up until the three-quarter mark and then hopefully you will have worn down the opposition enough for you to score easier tries.

"You can’t just throw the ball around willy-nilly. We (Stormers) learned that in our final game against the Lions in the Super 14 where we needed a bonus-point try to qualify but failed to get it because we did not stick to our structure and tried to run everything."

The 41-Test veteran believes there is a simple theory to winning the ball and keeping possession.

"We need to get into position quicker and that means keeping an eye on the flyhalf and pre-empting what he is going to do. It comes down to work rate, and making the right decisions on the ball," he said.

"The challenge is for each one of us to dominate his opposite number. If that happens how can we lose?"

De Villiers continued: "The battle for territory is going to be vital. The Wallabies have some astute kickers and it is an area of our game that we need to improve. It is much easier to score tries when you are in the opposition half and have them under pressure.

"You also have to have the ball to create that pressure and that requires the Boks to be much more effective at the breakdowns.

"We have not been precise in what we do at the breakdowns. It is vital that we put in a collective effort. It is about all 15 guys clearing out, not just the loose forwards.

"It is about knowing when to commit yourself to a ruck and when to stay out. If you want to score tries you need to keep the ball and ultimately you will only keep it if you have numbers to the breakdowns."

The Boks will face the Wallabies a second time in Johannesburg next weekend.