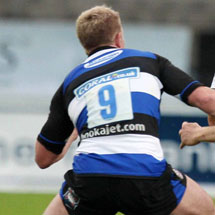 Claassens, who has eight Springbok caps to his name, earned plenty of praise for his performances last season before being selected in the team of the year at the Guinness Premiership end-of-season awards.

The former Free State Cheetah is now committed to the West Country club up until the 2010/11 season, with Bath head coach Steve Meehan delighted with Claassens’ decision.

"It is obviously terrific for the club that Michael has decided to stay, especially signing so early in the season," said Meehan.

"He is exactly the type of character and person that we want at Bath Rugby. Aside from his obvious playing abilities, he is the sort that I believe can really represent what Bath Rugby stands for.

Claasens suggested he had no hesitation in signing a new deal, even though it may hamper his chances of forcing his way back into the Springbok set-up prior to next year’s Lions tour.

"I really enjoyed my first season here,” said the 26-year-old, “it was great.

“Bath is a fantastic rugby city too.

"There is no other club in England that I would consider. I am very happy with the coaches and the team and I think Bath are really capable of going somewhere great."