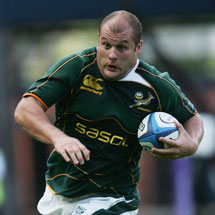 The duo were due to appear before the committee in Durban on Monday night after they were cited for two separate incidents during the Wallabies’ 27-15 win on Saturday.

Van der Linde was accused of a head butt during the game while Elsom was cited for pulling down Springboks captain Victor Matfield in a line-out.