The Magners League plans to introduce a new play-off system from the 2009/10 season. [more] 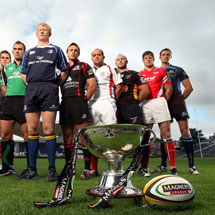 The Magners League plans to introduce a new play-off system from the 2009/10 season.

The move will see the Celtic competition follow both the Guinness Premiership and Top 14 in using a semi-final and final to decide its overall winner.

"Celtic Rugby is always striving to align itself with other professional rugby tournaments around the world, consequently this season will be the last that the Magners League is played in its present format,” said Director of Celtic Rugby David Jordan.

“From 2009/10 we will be introducing an end of season play-off to determine the Magners League Champions with the top four teams qualifying for the knockout stage.”

The intended alteration is part of a wider initiative to build on previous successes, with plans to restructure the season also under consideration.

"Magners League teams and players also enjoyed success in other competitions last season – the RBS Six Nations Champions, Heineken Cup and Anglo Welsh Cup winners are from amongst our ranks – whilst the representation of capped players in Magners League games is higher than other European leagues.

“Going forward we intend to address the irregular nature of the competition by creating a rhythmic season, achievable as Magners League weekends will not compete with any other tournament.”