South Africa winger Bryan Habana has been ruled out of the Tri-Nations clash with Australia in Johannesburg on Saturday. [more] 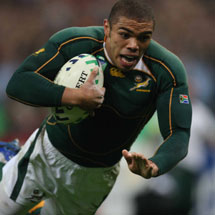 South Africa winger Bryan Habana has been ruled out of the Tri-Nations clash with Australia in Johannesburg on Saturday.

Habana has failed a late fitness test on a hamstring injury, having missed last weekend’s defeat to Australia.

The Springboks, who will hope to arrest a run of three straight defeats, are also without Francois Steyn, who has concussion, and JP Pietersen (hamstring).

However, coach Peter de Villiers is boosted by the availability of Victor Matfield and Bismarck du Plessis, who were both doubtful with groin and knee problems respectively.

Prop CJ van der Linde misses out as he has been suspended for four weeks for headbutting Australia’s Sam Cordingley last weekend.