Former Australia coach Eddie Jones has slammed the introduction of the new ELVs by saying they have been brought in for entertainment value rather than to improve the game. [more] 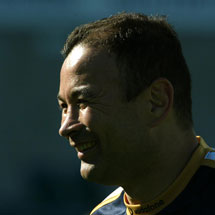 Former Australia coach Eddie Jones has slammed the introduction of the new ELVs by saying they have been brought in for entertainment value rather than to improve the game.

Jones, who is about to start his first season as director of rugby at Guinness Premiership side Saracens, has warned of the dangers of tampering with a sport which he believes is not in need of fixing.

"If the game is played well and refereed well there is nothing wrong with it,” said Jones, who led the Wallabies to the World Cup Final five years ago.

“These changes have been made with a view to entertainment, not to improving rugby."

The 48-year-old has even suggested that rugby should introduce an entirely new version of the sport if pure entertainment is the sole agenda.

Jones, whose last coaching post in his home country was with the Queensland Reds, has claimed that rugby could follow the example of Twenty20 cricket if it is so desperate to bring in new supporters and heighten entertainment.

"There are pockets around the world who want to see Twenty20 cricket so let’s make Twenty12 rugby.

“We could have 12 players, 20 minutes each way with no scrums or line-outs.

"As the game becomes more professional another form of the game could develop. Sevens hasn’t been a success as entertainment, but we need to keep Test match rugby. Around the world most people want to watch Test rugby.

Jones has also claimed that one of the main driving forces behind the ELVs, Australian Rugby Union chief executive John O’Neil, continues to back the changes because his union is competing with a number of other high-profile sports when it comes to attracting fans.

"John O’Neill is the greatest supporter of the changes and the pressure on rugby in Australia is to win fans.

"All three are simple motion games where the ball is always in play. To compete, the Super 14 has become a quick-tap motion game.

"The ball is in play a lot but that doesn’t create a better game, it creates entertainment – to the detriment of rugby.