Lions lock Danny Grewcock has been ruled out of the start of the new season. [more] 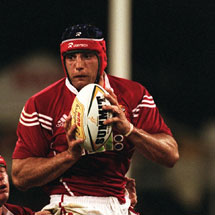 Lions lock Danny Grewcock has been ruled out of the start of the new season.

The 35-year-old toured with the Lions in 2001 and 2005 but will now have to play catch up if wants to make a third tour appearance.

Grewock requires surgery on a bicep injury he picked up during a pre-season friendly win over Llanelli Scarlets last weekend and is expected to be out of action for two months.

"It’s similar, if not more severe, to the injury he suffered at Newcastle early on last season," said Bath’s head coach Steve Meehan.

"That kept him out for two months and we expect him to need a similar length of time to recover from the operation he needs this time."

"Losing a player of Danny Grewcock’s huge influence and vast experience is a blow – as it would be to any other Premiership club," said Meehan.

"But we coped well last season when Borthwick was at the World Cup and when Grewcock was out injured and we’ll do it again.

"Peter Short was magnificent last season when they were missing and Harrison and Hooper have both brought valuable leadership skills to the squad for this season.

"We will need those qualities for the first couple of months of the new season."