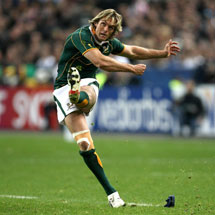 Montgomery, who was part of the World Cup-winning team last year in France and who celebrated his 100th Test match two weeks ago in Cape Town against New Zealand, has quit the international arena to spend more time with his family.

“Not many players can choose when they can leave Test rugby and that is what makes this so special to me to be able to leave now, after this win,” Montgomery said in a statement.

“I have had many memorable moments in a Springbok jersey and it has been a privilege to play for my country and to go around the world playing against so many great players of other countries.

“I will be playing out my career in Western Province and tonight I am thanking Peter (de Villiers), Dick (Muir) and Gary (Gold) for seeing value in my role in their first season as Bok coaches.

“Thank you for believing in me and allowing me an opportunity to earn 100 Test caps.”