Four of the team that tamed the Springboks in the first international to be played at Loftus Versfled in Pretoria 53 years ago were reunited at the Millennium Stadium in Cardiff on Tuesday afternoon. [more] 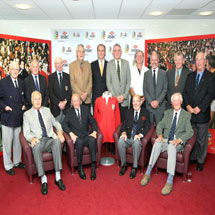 Four of the team that tamed the Springboks in the first international to be played at Loftus Versfled in Pretoria 53 years ago were reunited at the Millennium Stadium in Cardiff on Tuesday afternoon.

The ‘HSBC Audience with the 1955 Welsh Lions’ saw pack members. Bryn and Courtenay Meredith and Russell Robins joined by wing Gareth Griffiths in the Welsh capital.

They recounted tales of their great deeds on that 1955 tour, on which the Lions drew the Test series 2-2 with the Springboks, and revealed their great respect for South African rugby.

The event was staged on the eve of the 53rd anniversary of the Lions’ hard-fought 9-6 victory over the Boks which saw them move 2-1 ahead in the four-match series.

“It seems like a big film and I was an actor in it,” said Cardiff wing Griffiths, when recalling the tour.

“It was marvellous. We were well sought after, the South Africans liked us and the rugby was great.

“Being a Lion in South Africa was a bit like dying and going to heaven – everything I ever wanted to achieve came together in a fantastic four months.

“I loved playing on the hard grounds and really relished the contests with that legendary Springbok wing Tom van Vollenhoven.”

Newport hooker Bryn Meredith, who became with England scrum-half Dickie Jeeps the first Lion to make three tours when he went to Australasia in 1959 and returned to South Africa in 1962, gave an insight into what was at stake in the third Test in Pretoria.

“That third Test was a real war of attrition Both sides knew that, with the series poised 1-1, this was the vital game. We had to hold on in the first Test to win by a point, but were forced to play for half the game with only 14 men. That third Test at Loftus was one of the hardest games of rugby I’ve ever had to play,” said Meredith.

“Our backs were generally regarded as our strength but, on that day at Loftus, I’m proud to say that our pack, containing six Welshmen, stood up to the Springboks and came out on top. We had a hell of a party that night.”

Having won the first-ever international hosted by Loftus Versfeld, the Lions currently lead 3-1 in Test victories at the venue. Ian McGeechan’s men will hope to continue that impressive record when they return to Pretoria in less than 10 months’ time as they look to go one better than their ’55 compatriots by winning the Test series.