Potential Lions tourist James Haskell believes impressive club performances are the only way he can force his way into contention for next year's Lions tour to South Africa. [more] 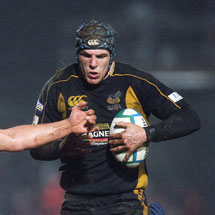 Potential Lions tourist James Haskell believes impressive club performances are the only way he can force his way into contention for next year’s Lions tour to South Africa.

The 23-year-old has publicly stated that it would be a ‘dream’ to represent the four Home Unions but he knows the only way to make that dream a reality is by performing week-in, week-out with London Wasps.

"The problem with starting a new season is that you’ve got to take small steps to get back to where you were," said Haskell, who has been named in England’s Elite Player Squad having made his international debut against Wales in Cardiff in February 2007.

"You can’t go straight back to the kind of form you had at the end of last season. I’m not even sure if I’m going to be in the team for the first game against London Irish.

"I’m trying to find my feet and get my nose to grindstone to get into the London Wasps team let alone worry about everything else because in rugby, as with most things in life, if you look too far ahead you’ll come unstuck pretty quickly."

Haskell was in impressive form throughout his club’s 2007/08 Guinness Premiership-winning season, with many supporters and former players expecting him to become a mainstay in the England back row for years to come.

He has already been touted as a possible Test starter when the Lions take on the Springboks in just over nine months’ time but the 6ft 4in, 17-and-a-half stone flanker/No8 is under no illusions as to what must lie at the heart of any possible future success.

James Haskell is one of England’s rising stars

"Hard work is what it’s all about. It’s about putting the extra effort in and also having a little bit of luck come your way. Most of that you can generate yourself by working hard and not being so anxious and uptight.

"In the last few pre-season games, there’s been a few positives but, from a personal point of view, it hasn’t gone as well as I wanted it to. I’ve just got to make sure I take stock and keep working hard."

Any Lions tour features the ultimate in competition for places, but Haskell is fully aware that he faces a similarly daunting task just to maintain a regular place in the Wasps back row – something he knows is a must if England and the Lions are to come calling.

"We’ve got some quality back row players here at Wasps. It’s tough enough to get into the Wasps team, let alone anything else.

"Competition can bring the best out of you. If you’ve got designs to be successful and to play for a good club and further your career, you’ve got to rise to those challenges.

"With Wasps, there’s challenges everyday and I really am solely focussed on that. That’s all I’m concerned with because you can’t take anything for granted at all."