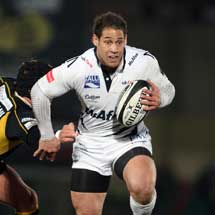 The former North Harbour and Blues star had been linked with a return to New Zealand but the 25-year-old has dispelled notions that he is returning Down Under.

“I’m happy where I am right now,” he told Radio Sport.

“We’ve got a great bunch of boys here, I’m loving my life over here in the north-west of England and if I come home that decision will be made in January-February of next year.

“I’m in no rush to make that decision. I haven’t made any plans, that’s a long way away and that’s all I’m going to say about it.

“I love it, walking down the street or to the mall and not being bothered.

“It’s a bit weird at first but you get used to it. It’s really good. It’s why I think a lot of players come over here and actually realise there’s more to life than rugby in New Zealand.”

The Sharks open their campaign against Newcastle Falcons on Sunday.