Leicester Tigers captain Martin Corry insists the club is looking to the future rather than the past as they finalise their preparations for the new season. [more] 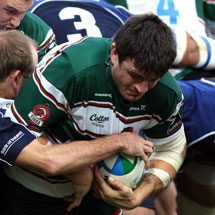 Leicester Tigers captain Martin Corry insists the club is looking to the future rather than the past as they finalise their preparations for the new season.

The 2006/07 double winners endured a disappointing campaign last time around as they failed to build on the success they achieved under former head coach Pat Howard.

A season without a trophy ended with the controversial dismissal of Howard’s replacement, former Argentina coach Marcelo Loffreda, who departed Welford Road after just six months in charge.

South African Heyneke Meyer has since been charged with the task of returning the 2001 and 2002 European champions to their glory days, something which Corry is determined to help him achieve in his 12th, and probably final, season with the East Midlands outfit.

“Lat season was a disappointing year but we can’t hold it as a millstone around our necks,” said Corry, who captained Tigers to a Guinness Premiership title and an EDF Energy Cup crown 16 months ago.

“There’s been a lot of change within the club in the off-season and in pre-season. Yes, we can learn some lessons from last year but it’s now more about what we can learn from the two new coaches coming in (Meyer and Australian backs coach Matt O’Connor). We have to develop as a team going into this season rather than reflecting too much on last season.”

Meyer arrives in Leicester with a hefty reputation having led the Blue Bulls to Super 14 glory in 2007 before narrowly missing out on the Springbok job at the turn of the year. Corry, who has worked under a number of world-renowned coaches such as Dean Richards, Bob Dwyer and Sir Clive Woodward, has certainly been impressed with what he has seen so far.

“Heyneke’s been brilliant since he came in. His attitude, the direction he’s given the club and the players, the culture and the values he holds dear means that we’ve got the ideal man as our head coach. It’s so far, so good.

“We’re very confident about the new season but everything you do on the training field has to be transferred on to the pitch. The club always strives to be the best and that’s something I always try to be myself.

“I can’t speak highly enough of the club. They always try and move in the right direction, sometimes more successfully than others, but the ambition to succeed is always there.”