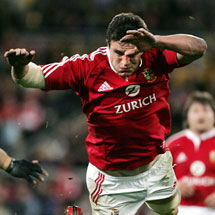 Two tours, six Tests, a spell as skipper and appearances in 15 of a possible 21 matches in 2001 and 2005 say a lot about the stature of Martin Corry.

As well as winning a World Cup with England, the Leicester legend has won everything there is to win in the club game. Five English Premiership titles, two European Cups and an Anglo-Welsh crown make for impressive reading yet it is his contribution on the most-recent Lions tour to Australia that he admits ranks of one of his career highlights.

The man who went on to captain his country during the 2005 and 2006 seasons was plying his trade with England in Canada when he learnt of his late call up to Graham Henry’s squad seven years ago. Injury to Simon Taylor resulted in a hectic summer for Corry, who made his Lions debut just a day after arriving Down Under. He went on to play in all three Tests, doing exactly what was asked of him during the 29-13 victory over the Wallabies in the opening rubber.

Four years later, Corry found himself part of the original touring party as the Lions prepared to face the All Blacks. Again, Corry played in all three Tests, starting the first and coming on as a replacement in Wellington and Auckland.

Having led England against Italy and Scotland during the 2005 Six Nations, he skippered the Lions against Taranaki in the second game on tour in New Zealand and also took over from Brian O’Driscoll for the majority of the first Test after the Irishman left the field injured in Christchurch.

There was a double celebration for Corry during that Taranaki game three years ago as he scored his first try in Lions colours. Corry’s second and final Lions score arrived in the 100-point demolition of Manawatu in between the first and second Tests.

On the Lions aura

"There was always a mythical status about the Lions. It wasn’t a case of ‘you can achieve this’. It was a sense that ‘this is the Lions’ and there was a real aura about it and an aura about the players.

"My goal was always to play for England. Once you’ve played for England, then you say ‘I’d love to play for the Lions’, but it’s very hard to have the Lions as a goal. I’ll always put it up there so, so high.

On the plus side of being called up late in 2001

"It did make it easier being called up late. There’s wasn’t any time to dwell on it. It was more a case of, ‘How am I going to get to Australia, what am I going to do, is there going to be someone there to meet me, will someone be waiting for me?’

"When I got there, it was literally a case of ‘Here’s your playbook. You need to learn this because you’re playing tomorrow.’ It was all a massive rush. With jet lag and everything, I didn’t really know where I was. I then played the Saturday as well so it was all about trying to focus on the games rather than thinking, ‘I’m on a Lions tour’.

"I think the great thing with the Lions is that everyone realises that you need to get to know each other. You’ve been knocking lumps out of each other throughout the year and there’s got to be a new bond. Everyone works hard to create that and all the players realise that it’s something special when you’re out there."

On selection for the first Test in 2001

"It was a real surprise to get selected for the first Test. I found out in bizarre circumstances. I went down to the team meeting and Richard Hill came up and tapped me on the bum and said ‘Congratulations mate’. I said ‘What do you mean’ and he replied, ‘Oh, don’t you know?’ I said ‘Ok, tell me what you know’ and he told me I was in. They tried to do this big presentation on the team but I’d already found out!"

On that stunning first Test win over the Wallabies

"That first Test was one of the highlights of my career. When I look back at it, I probably still can’t realise the enormity of the occasion. Everything about it, the build up, the crowd, was amazing. We were running out there thousands of miles from home and 75 percent of the crowd were wearing red shirts. Then, with the way we played, everything was just a dream moment."

On losing the series in Australia

"While the first Test was one of my career highlights, two weeks later was one of the real low points. We should have won the second Test and then we allowed too many mistakes to creep into our game in the third Test. It was a series defeat that hurts because we should have won it. It was very disappointing but, having said that, it was the first time I got to play on that kind of stage so I really enjoyed it."

"As a club, Leicester has a great way of bringing you back down to earth quite quickly. We came back and I got married so that brought me back down to earth pretty quickly as well. You start preparing for the new season and, with rugby, whatever happened last week is last week. You forget about it very quickly and start planning for what’s next."

On a disappointing tour in 2005

"When you look back at 2001, that was a massive high for me, but 2005 was a big disappointment. To go over there and be uncompetitive was frustrating. When you get on the biggest stage you want to play your best rugby and the Lions fell well short. That was disappointing but, as an organisation, I think they’ve learned a hell of a lot from that and that bodes very well for South Africa."

"I’ll be on the Lions tour, I can guarantee you. I won’t be playing, but I’ll be there! I’ll be out there having a good time. Saying that, you never know. Look at Andy Nicol in 2001, he was out there having fun and he still got in the squad for the final game so never say never!"