The city of Cardiff has celebrated the progress being made on a brand new stadium soon to house the Cardiff Blues. [more] 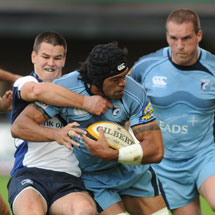 The city of Cardiff has celebrated the progress being made on a brand new stadium soon to house the Cardiff Blues.

The Blues are hoping to make the stadium in the Leckwith area of the Welsh capital their home as early as next season after they took the decision to expand away from the famous Arms Park.

Officials from the Blues, fellow tenants Cardiff City Football Club and Cardiff Council were in high spirits as the building work on the 26,500-seater stadium reached its highest point.

“With Cardiff Blues now firmly on board, the overall scheme here at Leckwith will represent an unsurpassed centre of sporting excellence for the city of Cardiff and for Wales as a whole," said Cardiff Council leader Rodney Berman.

Building work began on the project in 2007 with the ground set to become the second-largest sporting arena in Wales after the Millennium Stadium.