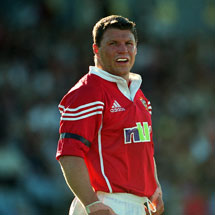 Gibbs, who was one of the stars of the victorious 1997 side the last time the Lions took on the Springboks, believes both men have the potential to follow in his footsteps in nine months time.

"I’d like to think that those two guys would be pushing hard for a Lions spot this summer," Gibbs told Scrum V.

"Because that’s where we will see the best of those two."

Henson was a Lion in 2005, while the versatile Roberts has only just switched to centre from his previous positions of full back or wing.

As well as possessing the physicality required to take on the World Champions, Gibbs believes both players have what it takes to make the most of the new Experimental Law Variations now in place.

"The law changes now benefit their styles immensely because they can build up momentum.

"A player like Jamie Roberts has great physiology. He is tall, he is quick and he has great balance.

"I think the five-metre advantage you have now will see centres have a distinct advantage. The No 12s have the opportunity to cannibalise and get the momentum going forward.”