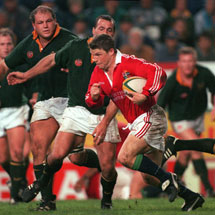 Scott Gibbs is all set to go to war with former British & Irish Lions team-mates Martin Johnson and Lawrence Dallaglio.

The former Wales and Lions great is coming out of retirement to captain an International Select XV against his arch-English rivals at Twickenham this Saturday.

The Help For Heroes Challenge match, which is aiming to raise £1m for our injured soldiers, is supposed to be a ‘charity match’. But Gibbs declared: "I don’t do friendlies."

The 37-year-old, who earned the nickname of ‘Car Crash’ for his explosive play on the 1997 Lions tour to South Africa, has been out of the game for four years.

But his one burning desire is to put one over on his old adversaries and pick up his first win at the home of English rugby.

Gibbs said: "I’ve got unfinished business at Twickenham. I’ve never won there and I want to win this challenge.

"It is a rugby game but I’m a serious person and it will be business as usual – I don’t do friendlies.

"There will be plenty of banter flying around on the day, but I haven’t forgotten that Lawrence and Martin are both cheating b***tards on the field. I know my side will have to front up, and possibly play dirty, to win.

"I couldn’t captain the team from the sidelines and my aim is to lead by example. I’ve got back into shape and I’m really up for the challenge."

Gibbs is best remembered for two moments in his illustrious 13-year Test career which spanned 53 caps for Wales as well as three Lions tours.

He hammered the giant Springbok prop Os du Randt into the ground during the Lions’ 2nd Test victory in 1997 and scored the match-winning try to deny Dallaglio’s men the Grand Slam in a 32-31 thriller at Wembley two years later. He also swapped codes and won the 1996 Challenge Cup with St Helens.