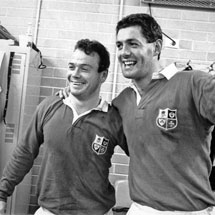 Evans, who represented the Lions in 1989, 1993 and 1997, winning two of the three series he was involved in, has first-hand knowledge of beating the Boks having played in the famous first Test for the Lions 11 years ago.

The Lions travel to South Africa in just nine months time but, before that, the Springboks will take on Wales, England and Scotland as they tour the UK.

Wales, who lost twice to Peter de Villiers’ men on their summer tour but are the current Grand Slam and Six Nations Champions, face all three Southern Hemisphere giants, along with Canada, this November.

"South Africa is the best chance of a win," Evans said on BBC Wales’ Scrum V.

”Australia are probably the most innovative and New Zealand are going to be a handful."

Evans, who won 72 caps for his country between 1987 and 1998, believes an uncertainty over style and a large degree of fatigue will prevent the Boks from being at their best when they run out at the Millennium Stadium on November 8.

"South Africa are still unsure what sort of game they want to play,” said Evans.

"Also, a lot of their players are looking tired. Butch James has played two years of solid rugby."