Former England head coach Brian Ashton has moved away from the world of rugby by taking up a role as director of coaching at the University of Bath. [more] 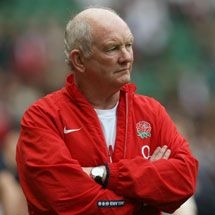 Former England head coach Brian Ashton has moved away from the world of rugby by taking up a role as director of coaching at the University of Bath.

The 62-year-old, who left his position with England earlier this year, has denied it is the end of his involvement with the sport but is enthusiastic about the size of the challenge ahead of him.

"I am delighted to have the opportunity to work with the University of Bath in the role of a consultant director of coaching," said Ashton.

"There are many talented high level performance coaches and athletes who operate in the university’s sports training village and I am looking forward to working alongside them to ensure that all set standards that are testing and provide competition success.

"When I was the national academy manager and head coach of England rugby we used the sports training village as our base so I am well aware of the facilities and expertise that the University of Bath is able to provide across a wide range of support areas.

"It’s not necessarily the end of my involvement (in rugby), although I will have my hands full with the massive challenge I’ve taken on here."

Ashton led England to the World Cup Final in October 2007 but left his role after the 2008 Six Nations.