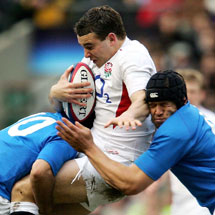 The former Bath star will wear Gloucester’s No 12 jersey for the first time having recovered from a fractured bone in his left wrist – an injury he picked up on England’s summer tour to New Zealand.

Barkley will form a midfield partnership with skipper Mike Tindall, who shifts back to the outside centre position, with Matthew Watkins moving to the wing in place of James Simpson-Daniel, who is rested.

"This is has been a long time coming and I am really excited about the opportunity," said Barkley.

"My rehabilitation has gone really well and now I just want to concentrate on contributing for my new club.

"Harlequins have made an excellent start to the season and we obviously appreciate their threat but after last week’s performance and result we are confident we can re-create that again and built on it this weekend.

"I am just delighted to be involved in the side – it has been a long time coming."

Barkley, who joined Gloucester from Bath in February on a two-year contract, missed his new side’s first-ever league win at his old club last weekend, as well as an opening day defeat to Leicester Tigers.