South Africa head coach Peter de Villiers has requested that a number of his Springbok stars be rested during this week's Currie Cup action. [more] 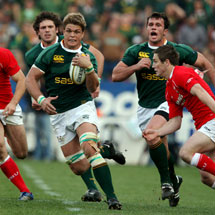 South Africa head coach Peter de Villiers has requested that a number of his Springbok stars be rested during this week’s Currie Cup action.

De Villiers has specifically asked that Cheetahs flanker Juan Smith be given a week off, although whether this happens or not appears to depend on the co-operation some of the other Currie Cup teams.

Springbok openside Smith will wear a neck brace untill Wednesday due to a bad neck spasm after he was injured in the 23-5 defeat against the Blue Bulls.

"We did agree with Peter that we will rest Juan this week," said Cheetahs coach and former London Irish hooker Naka Drotské, whose side face the Valke on Friday evening.

"But I’ve read in the papers that Western Province, who made the same deal with Peter, are not planning to do that.

”If Province pick all their Boks this week, I’m going to do the same and pick Juan. But if Province don’t pick their Boks, I will also rest Juan."