With their Bledisloe Cup clash in Hong Kong just over a month away, Australia and New Zealand have claimed they are keen to stage more international fixtures overseas. [more] 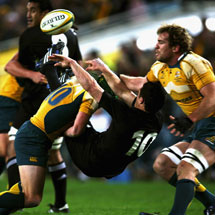 With their Bledisloe Cup clash in Hong Kong just over a month away, Australia and New Zealand have claimed they are keen to stage more international fixtures overseas.

The two sides clash on November 1 in what is the first Bledisloe Cup encounter outside either of the two participating countries.

Australian Rugby Union chief executive John O’Neill has suggested that, as well as looking to develop rugby through fixtures in Asia and the United States, London could also be a destination for future games between two of the world’s three leading sides.

“We are, without jeopardising our domestic markets, keen to showcase the game (whether it be in) Hong Kong, Tokyo and there’s some talk of a game in Denver, Colorado,” said O’Neill.

“The interest from all over the world in the fact the All Blacks and Wallabies are playing in Asia is really significant, and it won’t be the last time.

“We may even play All Blacks and the Wallabies at Twickenham, that’s not out of the question.”

O’Neill believes that both countries have a key role to play in developing the sport in Asia – something which is also likely to have financial benefits for both Unions.

“Australia and New Zealand in particular see the importance of helping rugby become a far more popular sport in Asia.

“South Africa has got the benefit of being in a European time zone but if we can develop Japanese rugby to a much more competitive level more quickly, and down the track China and South Korea, that can only be good for the game worldwide and particularly good in the Asia Pacific region.

“So Hong Kong’s a big stake in the ground and shows we’re very serious about expanding our game – Super rugby and Test match rugby – into Asia.”