The presence of next summer's Lions tour has had a major influence on South Africa's stance on the new Experimental Law Variations. [more] 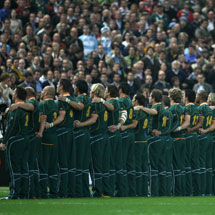 The presence of next summer’s Lions tour has had a major influence on South Africa’s stance on the new Experimental Law Variations.

The Boks are keen for southern hemisphere rugby to fall into line with their northern counterparts as they prepare for the 2009 visit of Ian McGeechan’s men.

Having lost the series the last time the Lions visited South Africa 11 years ago, the SARU are determined to ensure that no stone is left unturned in preventing the same fate befalling the Boks in 2009.

South Africa’s governing body are requesting that next season’s Super 14 and Tri Nations tournaments are played under the global ELVs – the same laws that will be in place when the Lions arrive in nine months’ time.

There are 13 global ELVs in place – as seen in competitions such as the Guinness Premiership and Magners League – and the major adjustment for the southern hemisphere nations would be in forgoing the regulation that sees most penalties replaced by free kicks.

“For consistency’s sake and to allow our Springboks the smoothest possible preparations for next year’s crucial series against the Lions it is vital that we play under one set of laws.

“We have had five sets of ELVs apply in South Africa this season and it has been confusing to the public and even to the referees who have shouldered a massive burden. One set of laws for all matches is the only way to go.

“Australia and New Zealand will also be playing their internationals under the global ELVs this year and next. I trust we will be able to reach a consensus with our partners when we meet, but if that is not possible then we may have to go to arbitration on the matter.”

Officials from South Africa, Australia and New Zealand will discuss the matter at a Sanzar executive committee meeting in Sydney on October 15.