A total of 19 Lions will be in action tonight as the new Guinness Premiership and Magners League seasons continue to gather pace. [more] 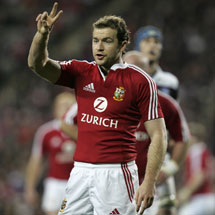 A total of 19 Lions will be in action tonight as the new Guinness Premiership and Magners League seasons continue to gather pace.

Some 15 players from the 2005 tour to New Zealand will be plying their trade for their clubs this evening, with 2001 Lion Iain Balshaw and 1997 tourist Mark Regan also set to feature.

A large percentage of 2005 squad members in action today can be found at Edgeley Park in Stockport where Sale Sharks host Gloucester Rugby.

Charlie Hodgson is joined in the Sharks’ starting line up by Welsh international Brent Cockbain, a late call up three years ago, while Jason White, Dwayne Peel and Mark Cueto are all named among the replacements.

Dean Ryan’s visitors have Gareth Cooper and Andy Titterrell on their bench, with Balshaw starting in the No15 shirt for the Cherry and Whites.

Martin Corry and Phil Vickery, members of both the 2001 and 2005 tour squads, captain their respective sides, while back-three stars Geordan Murphy and Josh Lewsey also make their starting line ups.

Murphy and Lewsey have been picked at full back and wing having played together in the same positions for the Lions in the third Test against the All Blacks in Wellington.

Leicester include two more Lions on the bench, with World Cup winners Ben Kay and Julian White bolstering their ranks.

Elsewhere in England’s top flight, Jonny Wilkinson wears the No10 shirt for Newcastle as they face Regan’s Bristol at Kingston Park, while in the Magners League, three more Lions will be on show.

Gareth Thomas, who took over the Lions captaincy in the absence of the injured Brian O’Driscoll starts on the wing for Cardiff Blues as they entertain Irish province Connacht at the Arms Park. Thomas is joined in the matchday 22 by centre Tom Shanklin who was tipped by many to secure a Lions Test place before injury ended his tour in 2005.

The final Lion in action is the Scarlets’ Stephen Jones. The man who appeared in all three Tests in 2005 skippers the Scarlets on their visit to Glasgow as they attempt to bounce back from last weekend’s defeat in Edinburgh.