Blues too hot for Connacht 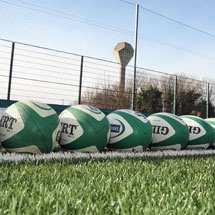 Cardiff Blues kick-started their Magners League campaign with a mammoth 58-0 win over Connacht on Friday night.

The Blues put their Irish counterparts to the sword with a sensational seven-try blitz in the opening period as Leigh Halfpenny grabbed an impressive double.

The Blues welcomed back talismanic No8 Xavier Rush on the bench after a knee injury while Halfpenny was given a rare start ahead of Ben Blair at full back.

And the hosts made the perfect start by racing into a 10-point lead within the opening six minutes.

The Blues took the lead through Sweeney‘s close-range penalty on three minutes before Roberts, who has been talked about as a possible Lion in 2009, glided through the Connacht defence to score the first try of the match.

A quick tap by Jason Spice initiated the move and a sharp long pass by Jamie Robinson allowed Wales centre Roberts to burst through a gaping hole with ease. Sweeney converted and the hosts stormed into a comfortable 10-0 lead.

Connacht fly-half Andy Dunne missed a rare chance to reduce the deficit with a routine penalty but the visitors couldn’t cope with the pace, power and quality of the Blues attack.

The hosts made their possession count when Sweeney collected Molitika’s pass to finish off a glorious free-flowing move under the posts.

Sweeney converted to complete an impressive opening quarter by the Blues and a nightmare start for Connacht.

The Blues kept their foot on the accelerator and Halfpenny capitalised for the third try on 32 minutes following more good approach work by Roberts and Spice before the 19-year-old wing scorched in for his second and a bonus-point victory for the home side a minute later.

Connacht’s play was loose and littered with basic errors and they weren’t helped by No8 Colm Rigney receiving a yellow card for persistent offending.
And how they paid the price as the Blues scored three tries in five minutes with a man advantage as the two Thomas’ powered over along with flanker Molitika to compound a disastrous half and a 46-0 deficit for the Irishman at the interval.

Sweeney crashed over for his second and the half-century of points just two minutes after the interval and Filise rounded off the nine-try rout in the final minute.

The Blues now start their EDF Energy Cup campaign with a trip to Sale Sharks next Saturday.