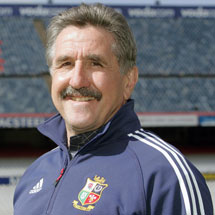 The excitement surrounding the start of a new season is always intense. There’s a sense of anticipation as to what’s to come, a sense of relief as to the clean slate in front of every player and every team, and a huge degree of enthusiasm as to the potential glory that awaits. Throw in one of the world’s biggest and most colourful sporting events and that enthusiasm reaches a whole new level.

"There is already great anticipation in our country of what is to come," says Davies, a legendary Welsh wing and a member of the Lions Test side on the victorious tour of New Zealand in 1971.

"However much our sport has changed and continues to change, the Lions remain the pinnacle of the British and Irish game. The players and coaches themselves have made this clear in their early-season comments and the media emphasied this heavily in their pre-season supplements.

"The domestic season has now kicked off and there’s definitely an extra edge to it. Although the players have plenty of other commitments and goals to focus on first, the presence of a Lions tour makes this season extra special."

Davies is of the opinion that the Lions tour can act as a huge incentive for the game’s top players, as well as those bursting on to the scene. Its presence can persuade the older generation to keep working harder than ever and the upcoming stars to rise to the occasion earlier than many might expect. In short, the presence of a Lions tour can benefit just about everyone, and that’s before the tour has even begun.

"I believe that knowing there is a Lions tour just around the corner can bring out the best in players. I don’t think it takes anything away from the club or international game – I believe it adds to it.

"Given the opportunity, every player wants to represent the Lions, but they know it’s not something that comes easy. You have to work hard to become a Lion. That hard work takes place week-in-week-out with your club. It also pushes through on to the international scene and, finally, a Lions tour itself.

"The players themselves know that they will be picked on form and not just reputation, and that should be a huge carrot to perform. The chance to become a Lion is definitely something that would excite me if I was still playing."

Davies may no longer be lacing up his boots but his enthusiasm for the Lions is unaffected. His role as tour manager means he will have a central part to play in South Africa in nine months’ time.

"A Lions tour gets everyone talking. Players, coaches and supporters alike want to be a part of it, and rightly so. Becoming a Lion is a massive achievement. It’s the pinnacle of a British or Irish player’s career and it’s not an opportunity that comes around too often.

"It’s only a four-year cycle and the Lions is a magic name in world rugby. There is a magic quality that attaches itself to the Lions and it is great that we are back on the road and coming to South Africa.

"It is not only a significant rugby event – the Lions verses the Springboks is a significant worldwide sporting event. The Lions are of major interest worldwide; the name unites the four Home Nations and helps develop a sense of friendship which is part of the essence of sport.

"A Lions tour brings intense competitiveness but it also crosses boundaries and enhances what we interpret as the spirit of rugby – something that is hugely important to maintain."

Davies and Lions head coach Ian McGeechan spent part of the summer in South Africa, continuing tour planning and preparations and watching the Springboks defeat Wales in the process.

It was, according to Davies, a more than worthwhile experience.

"We learnt a lot from our trip to South Africa in the summer and it certainly reminded us of how special the Lions tour is going to be.

"There was a lot of enthusiasm from the people we met, with South African supporters already talking about how much they are looking forward to May and June of next year. Rugby is a huge part of South African culture and the people talk about it and play it with a massive amount of pride.

"South Africa is a great rugby country and a challenging but ultimately enjoyable place to tour. We know there won’t be any easy games and we also know that we have to get our preparation and planning right if we want to come away with a series win.

"Facing the World Champions in their own backyard is a massive challenge but it’s one that Ian and I are very enthusiastic about."