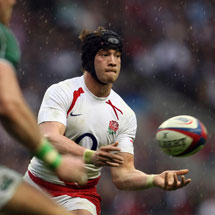 The 20-year-old fly-half was in stunning form last season before a fracture dislocation of his ankle ended his campaign in April.

Cipriani was expected to be out of action until mid-November, a prognosis that appeared to rule him out of the opening rounds of the Heineken Cup and England’s autumn internationals against the Pacific  Islanders, South Africa, Australia and New Zealand.

However, Lions head coach Ian McGeechan has named the England No10 in his starting line up for Wednesday night’s Guinness Premiership clash with Bath at Adams Park.

"Danny has made a fantastic recovery six weeks ahead of schedule,” said McGeechan, who will lead the Lions in South Africa next summer.

“His attitude has been superb and the work of the support staff at the club has been very impressive.

“We are delighted to see him back out on the pitch and hope that he is able to enjoy his return to action in front of a home crowd."

McGeechan, who watched his side record their first win of the season away to Leicester Tigers last Friday, is looking for another positive result against their opponents from the 2007/08 Premiership semi-final.

"On the back of a great display at Leicester, especially in the second half, we saw a lot of discipline in our performance and it is important that we now maintain this and continue to improve.

"Bath, currently the inform team in Premiership, are playing some very constructive rugby. They are a well coached and strong rugby side who command a great deal of respect and we know we must lift our game another level to produce a winning performance."