Leinster looking to bounce back

Leinster skipper Leo Cullen has insisted his side will use Sunday's defeat to rivals Munster as a stepping stone towards European success. [more] 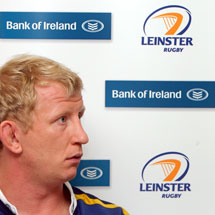 Leinster skipper Leo Cullen has insisted his side will use Sunday’s defeat to rivals Munster as a stepping stone towards European success.

The reigning Magners League Champions lost 18-0 to the Heineken Cup holders in front of a capacity 18.500 crowd at the Royal Dublin Society and Cullen is desperate for his men to bounce back as soon as possible.

"Munster was a good wake-up call for us,” said Cullen, who rejoined Leinster from Leicester Tigers at the beginning of last season.

“Maybe we were getting ahead of ourselves and getting ‘nilled’ at home is not a good feeling.

“We didn’t take the chances that did come our way. When we were trying to chase the game we turned over a lot of ball and Munster scored off the turnovers.

"Munster were way smarter in the way they played. It’s very hard to win games against good teams when you don’t put yourselves in a position to build pressure."

Europe’s premier competition, the Heineken Cup, kicks off in less than a fortnight’s time, with Leinster keen to improve on last year’s disappointing showing.

The Dublin-based side were eliminated at the group stages after away defeats to Toulouse, Leicester and Edinburgh ended their campaign far earlier than they had hoped.

"We need to bottle up the feelings from Sunday night and bring it into Europe," said Cullen, who reached the Heineken Cup Final with the Tigers two seasons ago.

"We’re very disappointed with the way things went in Europe last year and we need to target our pool games and qualify and anything can happen after that.”

Leinster have once again been drawn in one of the Heineken Cup’s tougher-looking pools.

The 2005/06 semi-finalists face 2007 winners London Wasps, Castres and Edinburgh, with only one team guaranteed qualification to the quarter-final stages.