Neil Best's hopes of becoming a Lion in 2009 have been dealt a severe blow after he was banned for 18 weeks. [more] 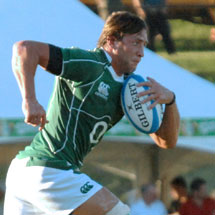 Neil Best’s hopes of becoming a Lion in 2009 have been dealt a severe blow after he was banned for 18 weeks.

The Northampton and Ireland flanker admitted making illegal contact with the eye area of Wasps back row James Haskell and has been suspended from all competition until the end of January next year.

The RFU disciplinary hearing concluded that Best had acted "recklessly but not deliberately", causing Haskell to require hospital treatment after the match late last month.

Although Best apologised to Haskell during the match, the offence was considered to be towards the top end of the scale of seriousness.

The suspension rules Best out of his country’s autumn internationals and jeopardises his chances of being involved in next year’s Six Nations.

It means the 29-year-old, who only joined Northampton from Ulster this summer, will have limited time to press his claims for inclusion in Ian McGeechan’s Lions squad for the tour of South Africa in nine months time.

Best has until mid-day tomorrow to lodge any appeal against the ban.