South Africa could rest a number of their star players during their November tour of the UK in preparation for the much-anticipated visit of the Lions next summer. [more] 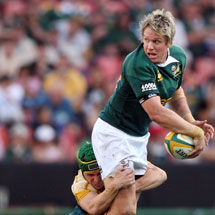 South Africa could rest a number of their star players during their November tour of the UK in preparation for the much-anticipated visit of the Lions next summer.

Springbok head coach Peter de Villiers has hinted that he may leave some of his big names at home this November as he is worried about their over exposure in the lead up to the Lions tour.

"If you look at the amount of rugby that some of the guys have played, there is no way that they will be fresh for the Lions tour next year,” said de Villiers’ agent Jonty Goslett.

"Peter told me that he may rest some of the top players.

"They have to play a whole Super 14 before the Lions tour, so the upcoming UK tour is the only chance for them to get a decent break."

“They played the whole year already in the Super 14, Tri-Nations and now in the Currie Cup.

"They haven’t received sufficient rest from the provinces. One has to remember that if they go on the end of the year tour, they will come back home at the end of November and then probably only get a few weeks off in December before doing pre-season training for the Super 14.”

Those names who could possibly be missing at Murrayfield, Twickenham and the Millennium Stadium next month include the likes of centre Jean de Villiers, second row and Tri Nations stand-in skipper Victor Matfield and Bath fly-half Butch James.

De Villiers has played in almost every minute of every Super 14 and Test match and is expected to appear for Western Province in the Currie Cup this weekend.

Matfield has shouldered a great deal of responsibility over the last few months and James has been playing almost non-stop since the 2007 World Cup.