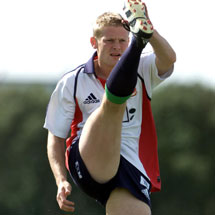 Iain Balshaw, a Lions tourist in Australia seven years ago, scored a hat-trick of tries last night as Gloucester beat Newcastle at Kingsholm.

The England full back, who was also due to tour with the Lions in 2005 before injury ruled him out of the squad prior to departure, helped the Cherry and Whites jump to third place in the Guinness Premiership table thanks to a 39-23 win.

Balshaw was joined on the scoresheet by another outside back looking to push his claims for selection to South Africa in nine months time. Last season’s Premiership player of the year, James Simpson-Daniel, crossed for a brace of tries as Dean Ryan’s men bounced back from Friday night’s defeat at Sale.

England playmaker Olly Barkley added four penalties, with Willie Walker slotting a conversion, to send Newcastle home with nothing to show for a brave effort that had seen the Falcons trail by just three points with less than 20 minutes to play.