With the pool stages of the EDF Energy Cup about to begin this evening, it has been announced that the competition is likely to undergo substantial changes next season. [more] 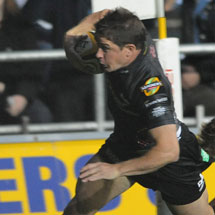 With the pool stages of the EDF Energy Cup about to begin this evening, it has been announced that the competition is likely to undergo substantial changes next season.

Plans are now in place to play the tournament on autumn international and Six Nations weekends, with a second tier competition also being discussed.

Despite meaning the tournament would be missing a host of internationals stars, McCafferty believes the EDF Energy Cup could still have an important place in the rugby calendar.

"There are a lot of top quality players involved in both leagues and while some of the internationals would be absent on Test duty that doesn’t mean to say we couldn’t have a strong, vibrant competition involving the clubs and regions.

"Will it be less attractive? Will it be different? It will certainly be different. But it will also give an opportunity for emerging players to get high quality competition against tough opposition and that’s attractive to supporters.

"We need to promote and position that correctly and price it appropriately, but there’s an attractive competition to be had and that’s what we’re working towards."

Discussions between Premier Rugby, the WRU and RFU are ongoing and McCafferty is hopeful that his ideas will be embraced to ensure that Anglo-Welsh rugby continues to enjoy its time in the spotlight.

Any future changes could also see the competition extended to include English National One and Welsh Premiership clubs across two distinct tiers.

"We’re looking at some possibilities and talking through those at the moment with the RFU and WRU.

"I’m very hopeful it will continue to involve all 12 Guinness Premiership teams and the four Welsh regions.

"We’re looking at the possibility of including a limited number of National Division One clubs from England and whether we can establish a second-tier Anglo-Welsh competition involving the other National League One clubs and Welsh Premier Division clubs. But that’s all on the drawing board at the moment and it’s what we’re talking through with the two unions.

"Anglo-Welsh rugby goes back a long way and that’s attractive from a rugby and commercial point of view and we hope to continue that.

"It would need to change format somewhat, but that doesn’t mean to say we can’t build a new vibrant competition on the back of what’s been achieved over the last three years or so."