Lions head coach Ian McGeechan has insisted that consistency and character will be vital if the Lions are to return home from South Africa with a series victory next summer. [more] 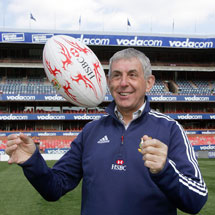 Lions head coach Ian McGeechan has insisted that consistency and character will be vital if the Lions are to return home from South Africa with a series victory next summer.

McGeechan leads the Lions to the land of the reigning World Champions in May 2009 looking for a repeat of the historic series win the last time the Lions visited South Africa.

If next year’s crop of Lions are to emulate their 1997 counterparts, McGeechan knows that individuals must be on the top of their game throughout the full 10-match tour.

"If you are aspiring to be a Lion then you know you don’t accept poor performances," said McGeechan.

"The only thing that happened in the past was that you were on tour for four months so you had eight weeks to prepare for the first Test. That’s just out of the window now.

"It’s that consistency on a Lions tour that, ultimately, if you’re going to do anything, will make the difference."

The 1997 tourists were famed for their camaraderie and, although McGeechan admits that choosing a squad of 35 players will be a tough task, the Scotsman has stated that selection will be based on more than just skill and talent.

"It’s relatively easy to pick 25 players. It’s the last 10 that often make the difference on a Lions tour.

”I think it’s important to give ourselves time to really look at those final selections and those key players.

"Getting the best group together, character-wise as well as talent-wise, is the thing.

"With all our background knowledge, it’s going to be the best group of players we think can come together and be successful."