The Springboks have turned to a familiar face in appointing their new team manager for next month's tour of the UK. [more] 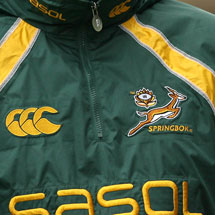 The Springboks have turned to a familiar face in appointing their new team manager for next month’s tour of the UK.

Veteran rugby administrator Arthob Petersen will again take over the role having previously held the position under Nick Mallett in 1997 and 1999 and Jake White in 2004 and 2005.

However, Peterson’s appointment is only on a short-term contract, with the SARU insisting that they will be reviewing the position prior to next year’s much-anticipated Lions tour.

"Arthob Petersen has been appointed as the Springbok team manager, but he has only been appointed for this tour," said Professor Jannie Ferreira, who chaired the SARU committee tasked with handling the appointment.

"Due to the little time we had, we were looking for an experienced person who had done the job before.

The World Champions had been without a team manager since last month after previous incumbent Andy Marinos took over as acting managing director of SA Rugby.